The Pie Made of (Fish) Heads

Interesting how Mousehole is pronounced 'Mosul' by Cornish locals, and this dish is Sumerian-Babylonian in origin and a version is still served in Iraq to this day!
It is not too far a stretch of imagination to think of Sumerian tin traders bringing their cuisine to the shores of ancient Cornwall.
There is a Sumerian-Babylonian dish that is about 6000 years old which Iraqis still prepare it to this day. 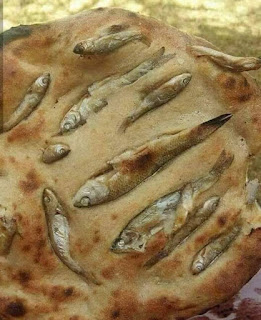 The zori hensh is the young fish that gets stuck in the fishermen's nets, it is typically mixed with dough and grilled in a clay oven.
The form of the eater's name is assumed to be Ninda Kha in Sumerian, and Rosto Chuni in Akkadian Babylonian, meaning a fish with a fish.
And it has other names, for example: in Samawah it is called marsh bread, and in Nasiriyah it is called Matbak bread, while in Basra it is called Samagi bread.
Source: https://www.facebook.com/historyandarcheology
Posted by LazyCookPete at 06:37

About The Lazy Cook

I'm all about good wholesome tasty food with an emphasis on ease-of-preparation and fun.

I plan my recipes to deliver maximum flavour with minimum effort, and sometimes just a hint of mischief!

If you enjoy easy-to-prepare, tasty and fun food - you're in the right place!

You will also find selected videos and recipes from contributors I admire.

Be sure to scroll down to check out some of my older pre-video era recipes, and let me know which ones you would like to see in video format.

Search for a recipe or ingredient:

My You Tube Channel